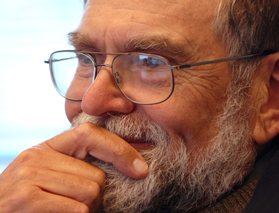 We are sad to report that Patrick (Pat) Nye died at Harrison Medical Center in Bremerton, Washington on March 7, 2008 after his heart stopped while riding his bicycle on March 3rd. He was 71. Pat is survived by his wife, Elaine Nye, and their two children, Phillipa and Adrian Nye.

A blog (http://patricknye.blogspot.com/) has been created by his family since Pat’s friends and relatives live far and wide and most likely won’t get the chance to get together to share their thoughts on Pat and his life. They hope that this will provide a way to do that.

In December 2007, the Board of Directors of Haskins Laboratories recorded its gratitude to Patrick W. Nye in recognition of his 36 years of immensely loyal service to the Laboratories. Pat stepped down from his place on the Board because at the time he felt that the distance between the Laboratories and his residence was too great to bridge for him to be useful.

During his years as Associate Director and Vice President, Pat cheerfully took on many administrative burdens that otherwise would have fallen on the President, especially in matters pertaining to budgets and management of the Lab’s finances, but not exclusively in this domain. He also devoted considerable time to other important duties, such as preparation of a Handbook for staff, and in developing guidelines for Lab support of graduate student research and doctoral dissertations. An especially valuable contribution was his oral history of Haskins Laboratories compiled through recording and editing interviews with longtime members of the staff. In addition to these services, Pat, whose doctorate was in physics, was also an active member of the research team, even after his position became primarily administrative. His earliest association with the Laboratories came about because of his work on a reading machine. Later he contributed to research on the reading machine for the blind and the articulatory synthesizer. Over the last several years of his association with Haskins he collaborated with Carol Fowler in a study of imitation and with Arthur Abramson in acoustic and perceptual studies of phonation types in two languages. It is hard to imagine the Lab without Pat. He will be missed. 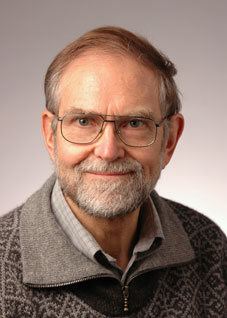 Nye, P. W. (1968). An examination of the electroretinogram of the pigeon in
response to stimuli of different intensity and wavelength and following intense chromatic adaptation. Vision Res.,8, 679-696.

Gracco, V. L. & Nye, P. W. (1993). Magnetometry in speech articulation
research: Some misadventures on the road to enlightenment. Proceedings of the ACCOR Workshop on Electromagnetic Articulography in Phonetic Research, 91-104.

familiarity with the phonetic patterning of English. Journal of Phonetics, 31, 63-79.